The Bundesliga returns this weekend to kick off the second half of the season, and I thought it would be the perfect time to post my annual Bundesliga Team of the season so far.

I’m going for a 3-4-3 formation. Some of the league’s biggest players are proving once again why they are the best and why it really is the best place for young talent.

You can always hit me up on Twitter @AlexJBlowers for advice, your picks, and thoughts on what’s happening in the world of soccer. Please check out the High Press Pod when you get a chance. We would greatly appreciate it if you hit the subscribe button and gave us a 5-star rating.

The Dutch goalkeeper has been phenomenal in between the sticks for SC Freiburg, making some ridiculous saves. His excellent form has been rewarded with a call-up to the Netherlands national side and could start for them at the 2022 Qatar World Cup if he maintains his form.

Mark Flekken has played every minute so far, averaging the least amount of goals conceded at 0.9 per game, has saved 67 shots, the second-highest in the league, and joint top of the clean sheet rankings with six alongside Robin Zentner, Manuel Neuer, and Andreas Luthe.

November’s Bundesliga player of the month Alphonso Davies, has recaptured his best form contributing three assists. What’s even more promising is his developing partnership with Leroy Sané down Bayern Munich’s left. Julian Nagelsmann is getting the best out of them, and I think they could be a deciding factor in the latter stages of the UEFA Champions League.

The ‘roadrunner’ has clocked the second-fastest speed this season, hitting 36.37km/h, is 12th in the intensive runs chart with 1199, and tops the sprint chart with 515.

The Swiss center-back has been one of Borussia Dortmund’s best performers, and the club are eager to tie him down to a new deal. Contract negotiations are ongoing, and they have given him till the Spring to make a decision. If he chooses to leave, he will have a host of suitors vying for his signature.

Freiburg’s rise up the table has been built on their solid backline, and 22-year-old Nico Schlotterbeck is one of their standout defenders. One of the hottest properties in German football we could see him follow in the footsteps of Robin Koch and Çaglar Söyüncü and move to the Premier League. 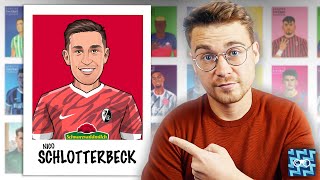 The 18-year-old is already one of the league’s best-attacking talents scoring eight goals and contributing five assists in 15 appearances. All of Europe’s elite clubs are circling this generational talent, but I think it will be a while before he moves on from Bayer Leverkusen.

Jude Bellingham is one of a handful of players you would say were world-class at 18-years-old. He has been a revelation in Dortmund’s midfield, and I’ve been impressed by his leadership qualities on the pitch. The kid has everything in his locker, scoring two goals, providing five assists, and is fifth in the Duels Chart, winning 193.

Bellingham is set to be one of the best midfielders of his generation and will captain England at some point. This goal against Arminia Bielefeld is his crowning moment of the season. A strong contender for Bundesliga Goal of the Season, and I would argue it deserved to make the final three for this year’s Puskás Award.

18-years-old shouldn’t be this good.

What a turnaround this season has been for Sané. Hansi Flick played him on the right last year, and he was heavily criticized for his poor form. Nagelsmann has switched him back to his favored left side, and he is going from strength to strength, appearing in all 17 games, scoring five, and contributing five assists.

Bayern’s fans have appreciated his efforts voting him player of the month three times this season.

Where would RB Leipzig be without Christopher Nkunku? The former PSG player has scored seven goals, contributed five assists, and been a rare highlight in their struggling season.

Thomas Müller is bossing the assists charts again, setting up his teammates 13 times. I highly recommend you take the time to watch him for a full 90 minutes. His quick passes, minimal touches, clinical execution, decision-making, movement, and well-timed runs are world-class, and you can learn so much from watching him.

Vincenzo Grifo has been one of Freiburg’s standout players providing six assists and scoring four goals, including this stunning free-kick against Dortmund in Matchday 02.

Naturally, Robert Lewandowski leads the goalscoring charts with 19 goals in 17 appearances. The best Number 9 in the world deserved the Ballon d’Or after finishing 2021 with 69 goals – 43 Bundesliga, 11 Champions League, two DFB-Pokal, and 13 with Poland – equalling Cristiano Ronaldo’s best ever calendar year.

I put a strong case forward at the High Press Pod Awards why Lewandowski should be named the player of 2021.

GK: Manuel Neuer – The world’s best GK has been in great form again, playing every minute, making 39 saves, keeping six clean sheets, and conceding 16 goals, the joint least amount.
CB: Konstantinos Mavropanos – The Arsenal loanee has impressed at VfB Stuttgart and has been amongst the goals scoring four.
LWB: Filip Kostić – No player has more crosses in open play than Kostić, who leads the way with 115. Six of them have resulted in goals, and he’s also got on the scoresheet three times.
CF: Erling Haaland – The second season in a row, Haaland misses out on the starting eleven due to injury. The Dortmund striker has scored an impressive 13 goals in 11 appearances, meaning he has averaged 1.18 goals per game, the highest in the league.
CF: Patrik Schick – Eight goals in three matches still isn’t enough to dethrone the Number 9 King Lewandowski. Schick has carried on his brilliant Euro 2020 form scoring 16 goals, and Dortmund are reportedly eyeing him as a replacement for Haaland. The team from the Black Forrest operates with the second smallest wage bill in the Bundesliga. For them to be sitting third after 17 games is a testament to the wonderful job Christian Streich has done and he recently passed the 10-year mark with the club.

European qualification is a real possibility this season, and if they do it, it will be a fantastic achievement by everyone involved with the club.