The Three Lions need a win to finish first and are coming off a disappointing performance against Scotland who held them to a 0-0 draw. Like all England games, there has been a massive overreaction from the fans and media. #SouthgateOut was trending on Twitter when Jack Grealish was left out of the starting lineup.

I’m choosing to focus on the positives. 4 points and two clean sheets is a solid start to the tournament and it’s all about peaking in the Knockout Stage. Finishing second or third could be a blessing in disguise. The winners of Group D will face the runners-up of Group F which will most likely be one of France, Germany or Portugal. 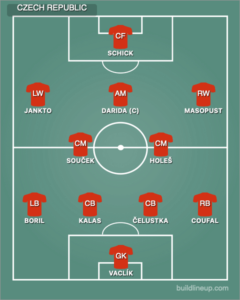 Jaroslav Šilhavý will keep faith with the Starting XI that held Croatia to a 1-1 draw. Patrik Schick scored from the spot to take his tally to 3 and is currently the tournament’s joint-top goalscorer with Cristiano Ronaldo. The Bayer Leverkusen forward will be full of confidence and fancy his chances against England.

Tomáš Souček and Vladimir Coufal have starred for West Ham this season in the Premier League. They’ll be up for this game and will want to secure bragging rights against their teammate Declan Rice.

Six of the Czech Republic’s squad play for Slavia Praha who knocked Leicester City and Rangers out of the Europa League before falling to Arsenal at the Quarterfinal stage. They know about being underdogs and will draw on that experience. Gareth Southgate will be disappointed with his side’s performance against Scotland, but I don’t think he will make a series of changes. Kieran Trippier and Kyle Walker will get recalled and Harry Maguire will start after declaring himself available. Tyrone Mings will feel hard done by after helping England keep two clean sheets.

It’s possible Southgate will bring Jordan Henderson in for Kalvin Phillips. The Liverpool captain is hugely influential and experienced but has only played 45 minutes of football since mid-February. The England manager tends to lean more on the cautious side, and I don’t think will risk starting him.

I’m hopeful Jadon Sancho comes in for Raheem Sterling. The argument for the Manchester City player starting is Harry Kane has excelled this season, dropping in between the lines, with Son Heung-min making runs beyond the opposition backline.

There’s a belief that Kane and Sterling can create a similar partnership and this worked against Croatia with Kane’s movement pulling the center-backs away to open up space down the middle for Sterling to run into and score.

Against Scotland, Sterling was frustrating to watch and lacked an end product. Kane was anonymous, only touching the ball 19 times and failing to register a single shot on target.

Sancho has been one of the standout players this season, providing 20 assists and scoring 16 goals in 38 appearances. He has played in the Champions League and performed in big matches scoring a brace and assisting Erling Haaland in Borussia Dortmund’s 4-1 win over RB Leipzig in the DFB-Pokal final.

Southgate needs to take a chance on him, but I’m not holding my breath. When asked specifically about Sancho, the England manager replied: “We’ve got some explosive options, and a lot of them are young players and experiencing a big tournament for the first time.”

“So as a coaching staff we are realistic about our expectations of them as individuals.”

“Jadon is in that mix. He’s trained well the last few days and of course we have got those options and those decisions to make.”

Southgate has shown himself to be a cautious manager and his side are struggling in the final third. The Czech Republic haven’t created much from open play with Schick scoring a wonder goal against Scotland and from the spot against Croatia. Both of their matches have all finished with two goals or less.

With a draw enough to guarantee passage to the Knockout Stages for both sides, I think this will be a low-scoring game.