I couldn’t think of a better way for us to win a Semi-final. The anticipation waiting for Harry Kane to take the penalty, the despair when Kasper Schmeichel saved it, the hope when it fell back into Kane’s path, and the pure ecstasy when he scored. That rollercoaster of emotion is why I love this sport, and I’ve been smiling from ear to ear ever since.

I hope the authorities identify the culprit who shined the green laser into Schmeichel’s eyes. There’s no place for that in any part of society, and I hope they get banned for life.

We’re playing in a major international final for the first time in 55 years, and it’s a better feeling than I ever imagined it would be.

I’m very fortunate to live in Las Vegas, and although I miss friends and family, I don’t miss England. However, I wish I could be back home to experience the next few days. It’s a different place when England are doing well. I can only imagine what the mood, energy, excitement, and anticipation is like up and down the country.

I feel for Denmark. Yes, there were two balls on the pitch, and if we conceded a penalty like that, I would feel hard done by. But, there was contact, and as horrible as it is to say, I couldn’t care less. We’ve suffered from worse injustices.

At the 1986 World Cup, the late legend Maradona pulled off the ‘Hand of God‘ the greatest con football has ever seen. In our 4-1 loss to Germany at the 2010 World Cup, Frank Lampard scored a legitimate goal. His volley crashed off the bar and clearly bounced behind the line, which would have tied the game at 2-2, but it wasn’t given.

Sometimes decisions go against you, and sometimes they go for you. On Wednesday, lady luck was in our corner for a change. 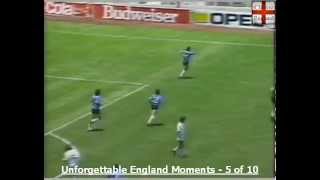 I would love for us to win on Sunday, but I won’t be overly disappointed if we fall short. I’m wise enough to know anything can happen in a one-off game. Contrary to Twitter, we’re not all arrogant and believe it’s our god-given right to win every competition.

All I’ve ever wanted from England is for them to perform at a level befitting of their talent with confidence and a plan. Gareth Southgate and his staff have built that environment for this group of players, who are one of the youngest squads at the tournament. For the first time since our ‘Golden Generation‘ thrashed Germany 5-1 in 2001, I have genuine hope and enthusiasm for our future.

All the best to Italy and their fans. Whatever happens on Sunday, I hope you enjoy the day because that is what I’ll be doing at Circa Sportsbook with my wife and friends. This could be the only time in my life we reach a final and I intend to make the most of it.

Hit me up on Twitter @RegistaPicks with your tips and where you’re watching the Euro 2020 final. Roberto Mancini will stick with the same starting eleven he picked against Spain. Emerson Palmieri will continue in place of Leonardo Spinazzola who will be devastated he’s missing out after rupturing his Achilles against Belgium. The Roma full-back has been one of the players of the tournament and will be out of action for six months.

Marco Verratti, Nicoló Barella, and Jorginho will continue as the midfield three. One of Italy’s stars in the opening two games Manual Locatelli will have to settle for starting on the bench.

Federico Chiesa will continue up top alongside Ciro Immobile and Lorenzo Insigne after earning the UEFA Star of the Match award against Spain for this beautifully curled effort past Unai Símon. I think Southgate will continue with the 4-2-3-1 formation he used in the Quarter-finals and Semi-finals. England bossed both of those games and confidence will be high they can do the same against Italy.

There’s been talk of bringing Jordan Henderson and Phil Foden into the lineup for their experience, but I am dead against it. It has a ‘Golden Generation’ feel about it when players were selected on reputation rather than form. This is the furthest we’ve got in 55 years, and Kalvin Phillips, Declan Rice, and Bukayo Saka all played a big part in that. They deserve to start the final.

In the past, Southgate has turned to Kieran Trippier for the big games. Against Germany, the Atlético Madrid full-back was tasked with keeping Robin Gosens quiet. It’s possible he could be asked to do a similar job on Chiesa, but I think he will stick with Luke Shaw, who has been excellent.

As I pointed out above, this is a one-off game where anything can happen. However, that doesn’t mean I’m not going to back England all the way.

I genuinely believe we’re the better side with a stronger bench, have more in the tank, and home advantage at Wembley. Italy looked dead on their feet against Spain, traveled more, have an older squad, and lost a key player in Spinazzola.

We showed immense character to come back against Denmark after going a goal down. Italy are yet to go behind in this tournament, so it’s difficult to know how Mancini will respond tactically if they have to chase the game.

Pu your money behind England lifting their first major trophy in 55 years.

Since the Austria game, I’ve been writing about how this Italy side can be gotten at. In their 2-1 win over Belgium, Romelu Lukaku missed two glorious chances, and Spain played them off the park in the Semi-final.

I think we can beat them in 90 minutes.

These two can cause Italy problems all day with their pace, trickery, movement, and ability to get in behind. Back one of them to lay on a goal for a teammate.

BETTING TIP: Bukayo Saka or Raheem Sterling To Give An Assist +300