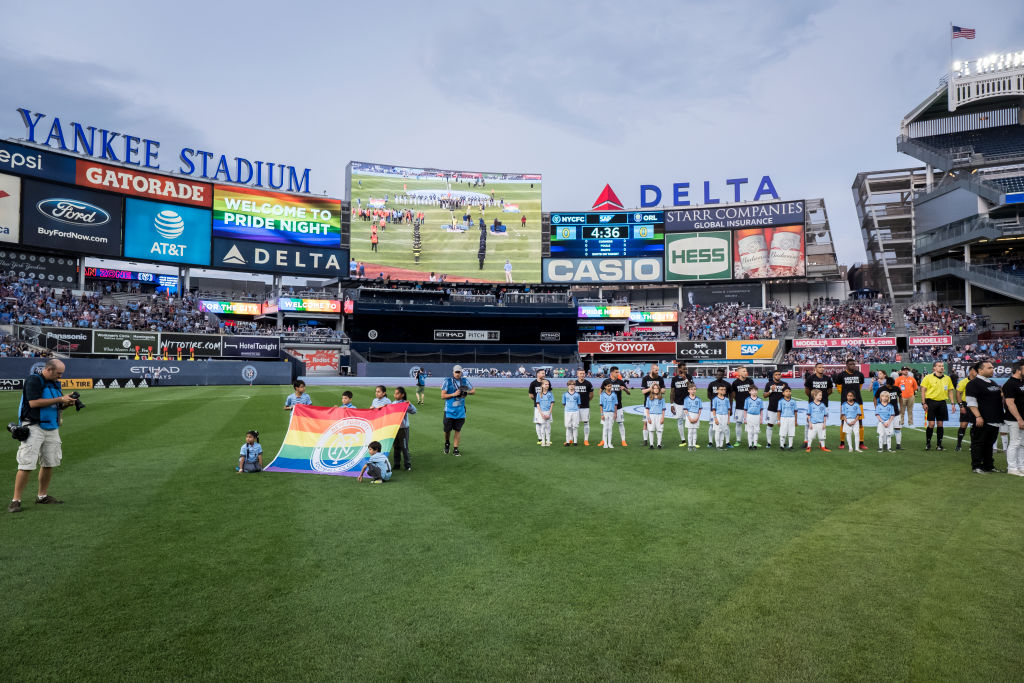 By one set of standards, Major League Soccer is an industry leader when it comes to its relationships with the LGBTQ community.

The league is home to the only out athlete currently active in one of the five major men’s North American sports leagues (or top-division soccer league): Minnesota United midfielder Collin Martin. Also, now-retired LA Galaxy starter Robbie Rogers made history as the first active professional athlete to come out in 2013.

Where MLS gets it right

Last year 17 of 23 MLS teams held “pride night” activities, as did this year’s expansion newcomers, FC Cincinnati, in their final season in USL. The league has a partnership with the You Can Play Project and many past and present players participate in the Athlete Ally initiative.

In recent years, several players have been fined and/or suspended for their use of homophobic language on the field. Rainbow flags and similar symbols are common sights in the stands at most MLS matches and many organized supporters groups make clear their allyship with marginalized groups.

MLS’s “Soccer For All” campaign includes “gender,” “gender identity” and “sexual orientation” among its list of descriptors in stating that “everyone is welcome” at its games and events. The campaign is used to commemorate Pride Month along with other comparable occasions celebrating diversity and tolerance. On May 22, the league will kick off “Soccer For All Month,” an effort to “showcase the collective efforts taking place throughout the league to foster more inclusive communities.”

Where MLS has room to improve

And yet, many LGBTQ soccer fans are routinely left cold by MLS, alienated by what some perceive as tone-deaf and ham-handed responses to topics that matter to them. A handful of examples:

Chris Billig is one of MLS’s more prominent critics in this area.

“They’ve had great moments, don’t get me wrong. Especially when they started the whole ‘Don’t Cross the Line’ awareness program in 2012,” said Billig, a soccer fan and activist who runs the LGBT.soccer website, in a recent conversation with High Press Soccer. “The video that year specifically called out racism, sexism and homophobia. It was a very deliberate effort that year to call out forms of discrimination and abuse and say, ‘these kind of things are not welcome here.’

“Over the years it morphed into … a generic, be-nice-to-everybody kind of thing and everybody’s welcome, and now it’s just ‘Soccer For All,’” he continued, noting that the official “Don’t Cross the Line” videos have been removed from YouTube.

“I would love to have a Soccer For All Month, it’s a great idea to say we’re welcoming for all, but the one thing that’s frustrating is that they use Pride Month to do it. So it’s almost like a little bit of an erasure of our community – it’s your month, but we’re going to make it for everybody now.”

Even with room to improve, still ahead of peer pro leagues

Compared to generally conservative counterparts in baseball and American football, MLS looks pretty open-minded. While the NFL was riven by controversy over some players’ decisions to kneel during the national anthem in response to police violence and brutality, MLS commissioner Don Garber went so far as to issue a statement affirming “support of players’ collective and individual right to freedom of expression” in such situations.

Garber looked somewhat less deft when responding to questions about the dangers posed by white supremacists at NYCFC games, however, with a cautious answer that left many fans from marginalized groups wondering if league leaders understood what was at stake for them.

The debate will soon fire up once again, as MLS is set to unveil a national corporate sponsorship deal with Chick-fil-A, the restaurant chain which has become a lightning rod for its financial support of homophobic charities and causes. Multiple sources tell High Press Soccer that the partnership has already been a flashpoint within league circles, with many employees expressing their discomfort with the move.

And compared to the dozens of out players in the National Women’s Soccer League, where the 2015 arrival of marriage equality in the U.S. was openly cheered by most teams’ social-media accounts (not to mention the U.S. Soccer Federations’), MLS having only one out player in its current ranks and two in its history looks less progressive.

“I think MLS is in a very difficult spot, where they know that a large percentage of their fanbase is somewhere right of center, and votes Republican, and they don’t want to offend or scare away their fanbase,” said Kim McCauley, a longtime soccer journalist and pundit with SBNation.com as well as a member of the LGBTQ community.

“The unfortunate reality of the political climate is that by not taking sides, you are taking sides,” she added. “And I think they would’ve been correct 10 years ago in the way that they are handling these situations. The difference between the farthest-left politically acceptable discourse and the farthest-right politically acceptable discourse wasn’t really that wide of a gap compared to what it is today.

“But now you have a problem with the people who are in power being actively hostile to LGBT people. You have the supporters of those politicians in MLS supporters’ groups, and sneaking banners into the stadium that are supporting fascist ideology.”

As the United States’ wider political dialogue becomes more and more rancorous and divisive in the Trump era, the mild middle ground has become a lonelier, less safe place to stand.

“MLS is in a position where, if they don’t want to antagonize LGBT fans, they can’t really ride that line anymore and say that they want to be apolitical,” said McCauley. “By not taking sides, you are basically saying it’s OK that people with violent ideology are making LGBT people uncomfortable at our games. So I understand where they’re coming from and I get why they’ve taken this position, but it’s not really a viable position anymore.”

Asked to comment on this, the shift from “Don’t Cross the Line” to “Soccer For All” and other aspects of this topic, an MLS spokesperson provided the following statement:

“We are extremely proud to continue to evolve the Soccer For All platform. The campaign captures the unique spirit and diverse environment that embodies MLS. It reflects the collective efforts taking place throughout the league to foster more inclusive communities.”

Billig believes that some leagues in Europe, where hooligan culture has left a dark history of violence and extremism hanging over the game, have benefited from a more explicit outreach to their LGBTQ fans, such as the English Premier League’s “Rainbow Laces” partnership with Stonewall and the Football v Homophobia initiative.

“[They’re] bold about it and not having any kind of fear of what the blowback will be from some sectors of their fanbase. But it’s also a whole different world over there,” he said. “Things like homophobia and racism get investigated by police, where over here we’re still in a pure free-speech kind of zone in this country, where we don’t police even hate speech.

“I follow the comments sections; U.S. Soccer and MLS and anybody else who does this kind of stuff gets a lot of grief for it,” he added. “They’re trying to broaden what they’re doing so that ‘everybody feels welcome’ and that kind of thing, when I feel like the LGBTQ community, still to this day, needs a very explicit and specific welcome into soccer. Still.”

Pointing to Nike’s bold, and ultimately profitable, embrace of Colin Kaepernick, McCauley suggests that getting off the fence in either direction would benefit MLS – not only in financial terms but in the depth of their audience’s interest and devotion.

“And I think if they went the complete opposite direction, of going all-in on supporting trans equality and black lives matter and all-in social justice, I think they would also make more money from that. They’re in a place where they don’t want to offend anybody and by doing that, their actual passionate fanbase is very, very small.”

Billig points to MLS’s Black History Month roundtables as an example of an effective contribution to a wider dialogue, and singled out LAFC for their committed and effective strategies to stamp out incidences of the homophobic goal-kick chant at their games at Banc of California Stadium. Ultimately, he stressed, both words, actions and perceptions are important elements in this sphere – not only for fans but players and staff members, too.

“Look, we still only have one active player right now on the men’s side that’s out, and heck, we still have women[’s players] coming out,” said Billig.

“That’s why I really feel like these deliberate acts of welcome are still important. Because I think showing that we have a safe space as fans at the game is great, but we really need to show that players who may be considering coming out have a safe space as well, that those goal-kick chants aren’t going to turn into something worse if they come out of the closet.”