Matchday 16’s marquee fixture sees Liverpool legend Steven Gerrard manage at Anfield for the first time in a competitive game. The fans would have loved for their idol to be in the home dugout but will have to wait a few more seasons.

Gerrard will be in the away dugout with his new club Aston Villa who have won three out of four games since he took over. They sit 4 points outside of the European spots, and Gerrard fully believes the club and squad can challenge for one of those places.

If you weren’t to learn more about Gerrard’s management style, playing philosophy, ambitions, and plans, I thoroughly recommend checking out his Sky Sports interview with former teammate Jamie Carragher. 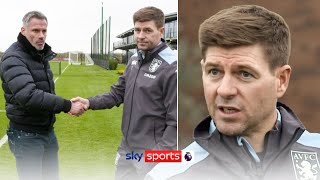 The game is scheduled to kick off Saturday at 10 AM EST and will be shown live on NBCSN. Jürgen Klopp rested several key players midweek and will restore them all to the lineup.

Joe Gomez and Naby Keïta came off the bench against AC Milan to complete their return from injury just in time for the packed Christmas schedule. Their return means Liverpool’s squad is almost back to full strength, with Roberto Firmino the only notable absentee. I’m confident Gerrard will stick to his favored 4-3-3 formation and select the same starting lineup that beat Leicester City 2-1 last weekend with one exception.

Matt Targett will return for this game after overcoming his head injury. Ashley Young has played well in his absence, but at 36-years-old there’s a good chance he will struggle against Mohamed Salah, who is arguably the best player in the world right now.

Danny Ings and Trezeguet could make the bench to give Gerrard attacking options if he needs to switch it up.

This is a really difficult match to find value. Sportsbooks have Liverpool as massive favorites on the Moneyline -450, and rightly so. They are on a five-game winning streak and pulled off an impressive 2-1 victory against AC Milan midweek with several of their first-choice players rested. My first instinct is to back Liverpool on the spread, but -1.5 Goals at -155 isn’t good value, and -2.5 Goals at +170 is a bit of my stretch with Gerrard only four games into his Aston Villa tenure.

We know Gerrard likes a 4-3-3 formation and, when out of possession, wants his team to press with the front three playing narrow to force the opposition wide to the wing-backs. I don’t think he is naive enough to play this way at Anfield, considering the quality of Trent Alexander-Arnold and Andrew Robertson. He did use these tactics in their 2-1 loss against Manchester City, but that was a home game.

The point I’m trying to make here is that there are many unknowns around Gerrard’s management style and approach to games against the big sides. My advice is to avoid betting on the outcome of this game and look for value in the Player Props market.

Diogo Jota has scored four goals in his last four Premier League games and should have had a fifth last week against Wolves. Six yards out with an open goal in front of him, and all the time in the world, he somehow hit Conor Coady. Back him to bounce back from last weekend’s disappointment and get on the scoresheet.